Ransomware: An Increasing But Avoidable Threat

Imagine it’s 30 years ago, a time when your data isn’t kept in computers, but in physical formats.
Imagine that someone has broken into your home and taken some of your most valuable records and possessions. They stole your photo albums – of children, weddings, and memories you cherish. They’ve taken your purchase records, receipts, and warranty cards. Maybe you run a home business, and they’ve taken all your financial and customer records. In short, they’ve taken the most valuable information you possess. And pinned to your door is a note saying you can have it all back…if you pay the thieves $5,000. The choice is yours.

Fast forward to the modern era. All the information the thieves stole is now kept digitally on computers. Most people never print their photos. Business data is stored in spreadsheets or as tables in databases. And an increasing number of people are ridding themselves of paper records altogether with scanners and the cameras on their smartphone.

Our computers are the digital safes that store all this data, and our passwords are the combinations. With ransomware, hackers – modern day thieves – use specialized software known commonly as ransomware to change this combination, then offer to sell them back to the owner for enormous sums.

“Ransomware” is the name for a specific kind of virus or computer “malware”. Malware has been around since the dawn of the internet. But ransomware, in particular, has emerged only as the amount of information kept on computers became large enough to make people willing to pay to get it back. Moreover, our increased reliance on smartphones – which have also been targeted by ransomware – makes ransomware even more lucrative for thieves.

The number of ransomware attacks has been building for some time. The term, however, was not widely known outside the computer security industry until this year, when in May 2017 the so-called “WannaCry” ransomware attack locked up computers worldwide, with more than 300,000 computers affected in just a few days. Like most ransomware attacks, when users tried to log in they were faced with a screen stating that their computer had been encrypted and that users could decrypt their drives by sending Bitcoin payments to a particular “bitcoin address”, using anonymous and untraceable “cryptocurrency”.

Though the ransomware threat seems frightening and mysterious, there a number of very easy solutions to avoid being targeted.
The first is to perform regular backups of important data regularly. These backups should be kept unconnected to computers, such as on external hard drives or in the cloud, like on Dropbox or Google Drive. A second, and perhaps the easiest, security step is to make sure that all your computers and smartphones are updated with the most recent software. Software makers like Microsoft, Apple, and Google employee thousands of computer experts just to find and fix the vulnerabilities that ransomware exploits. So when your computer or phone says it’s time for an update, take a few minutes it to do so, since updates contain security fixes that will protect you from ransomware.

A third way to avoid ransomware is developing safe online habits. Never open an email attachment from somebody you don’t know, as these could contain malware that helps hackers enter your computer. Similarly, don’t click on links to sites that you don’t recognize or that seem unsafe, and never download a file if you don’t specifically know what it is. Most browsers (like Chrome, Firefox, and Safari) have optional extensions that can help determine if a site is safe, such as the free “WOT: Web of Trust” extension for Chrome (https://chrome.google.com/webstore/detail/wot-web-of-trust-website/bhmmomiinigofkjcapegjjndpbikblnp?hl=en), which can be installed in seconds and provides amazing support for even the least tech-savvy among us.

Finally, the third-party anti-malware software can provide an additional layer of safety. Some of the most commonly recommended, best-reviewed options include Bitdefender (https://www.bitdefender.com/), Kaspersky (https://usa.kaspersky.com/), and Malwarebytes (https://www.malwarebytes.com/), all of which provide amazing support and offer both free and paid solutions to fit your needs.

While ransomware is an emerging security threat that should be taken seriously, there is no need to live in fear or to avoid computers and smartphones just to stay safe. A few simple habits and security fixes are all you need to keep your valuable data out of the hands of modern day thieves. 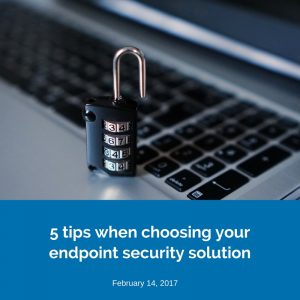